Some time ago, Builders had a super weapon of outstanding power: the so-called supertesla. It was so mighty and enemy-spanking, that funky even made a fix on superteslas. So they didn't work any longer.

How did they work? The idea was to send some rifles to a square, where u will build at next time a tesla - so tesla and rifles make a fusion together: a super-building. Now, the rifles take the damage of attacking tanks, while the tesla fires - as long as the last rifle was dead, only then the tank-fire damaged the tesla as a structure. U see easily, why it was much harder to kill a super-tesla than a normal one. Build a super structure was a Game-changer. GG, no re.


See a clip of a, by now, historical match: cousinehy versus crush with super-tesla included:

Above i said: Funky fixed it. This meant: No longer do the inside-units take the damage of the attackers, but the buildings does also. But, there is new light on the horizon. In a recent update log, funky announced:

Super Tesla fix can now be optional (will be enabled soon as checkbox in the client) -> link .

That would re-enable the option like same with formation-fix on/off, or magic-build on/off very soon. Means: Super-Structures are soon possible again! wowowo

However, many long-time players seem to have forgotten the general idea of bringing units into buildings, and which factors that tactic is depending on, or which limits and options there are about it. Some days ago, a supposedly new player was asking @cncnetforums (see topic: pillboxes), if there was an option to bring rifles into pillboxes - which he kind of remembers cloudy from his old days playing RA, but struggling now with it.

The answers weren't that helpful, even trolling-ly, so funky deleted them respectfully. Well, thanks to this guy: dinsdale81, who is the main inspiration for this article & good luck to him :)

3. WHICH UNITS TO BRING INTO A BUILDING and HOW?

In Theory u can bring any type of land-unit (soldiers, tanks, trucks) into any type of land-building. Also theoretically u could do so with sea-units and naval yards, its use is simple impractical.


By any type of unit, i actually mean any: rifles, rocket soldiers, engineers, a tanya, all tanks from light over medium to heavy to mammoth, even V2 launchers and artillery.


By any type of building, i actually mean any - although the historical prime example is with tesla, it works also well with: silos, flamers, pills, turrets, anti-air and sams, gaps etc.

The only real limit is on the buildings square-size: The smaller the building (1 square only) the better u can bring units inside. Two-square buildings work likewise, but larger ones are tough to manage (maybe even impractical therefore); the reason is its much tougher time management, which brings us to the overall interesting question:

How to bring units inside a building? It is all about timing! Select 1-5 soldiers or 1 tank and have a building ready to place. Send the unit(s) to the point, where u will deploy the building. Then, deploy the building just in time of unit-arriving! Haha. Timing. If u pressed to early to build, the units will stand outside -- if u press it too late, the units stand on the square and block u from building there. It surely takes some practice - while remains hard to master. Cause time is winning on RedAlert. And lost time is a loosing game. U better train double before risking a super-structure too keen.

Now some examples of possible superstructures, some of more use than others obviously, but the variations matter for me here more to show the extend of possibilities: 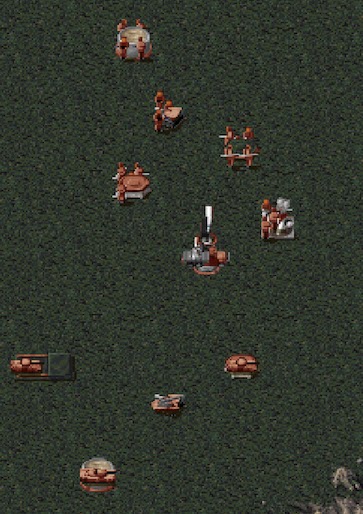 Rocket Soldiers in an AA-Gun are surely a super-defensive. And the mobile-gap-Gap-generator just funny to watch at :)
Maybe @Ribbon map, is see some possible use of turrets/-pills with rifles/rockets in early game. 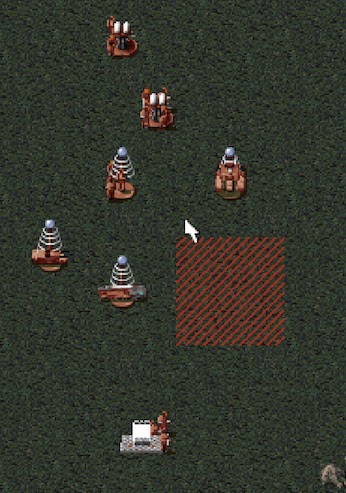 The Tesla-variations are a lot. Preferred is, however, the version with rifles - cause always available, cheap, and 5 units to kill then. Note: a Mammoth inside gives some new qualities to the structure: self-healing function and also anti-air secondary weapon. 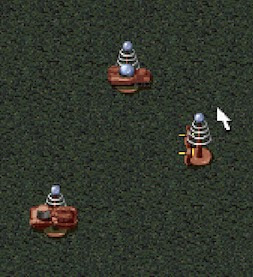 Well, out of pure fun: A Tesla-tanked-Tesla xDDDDDDDDD

Besides the already mentioned timing, other factors are to consider also:


a) the slower your inside-wished unit moves, the harder it is to time the exact right moment of the structure-build. So rifles are easy, while rocket soldiers are harder. Tanks are easier, while bringing a MADtank into a building is challenging ^^.


b) Please take a look back on the second pic, and u will see a red-squared figure. This means u cannot build new buildings next to a super-structure. It simply looses its build-range-expand! Which is a actually good news, cause out of this reason, a super-tesla-basewalk is impossible. hoho

c) If u have a super-structure in your screen view and press E for all-select (or select those units inside by cursor) and give a move command: the inside-units will follow and move out.

d) The by far WORST enemy of a super-structure is the Lag of a game in general. Lag makes small pauses and delays tinthe game - which results in harder exact timing! So u might can do a super-structure in skirmish mode with yourself, but consider such an option twice, if playing with laggy players.

Units are now inside the building. But, ... but but but: can u even then add some features to it by certain hotkeys?

In question was: Can u bring inside units into guard- or escort-mode (which would add some range-plus to some units, like previously shown in the GQ-article; besides the real functionality of that range-plus remains secretly until fully tested out). Tested was: G-click to place where to-build firstly, secondly inside G by only pressing it once (normally gives stationary guard-mode then), and thirdly to let inside rifles escort (ctrl+ALT+click) another inside-riffle.

To make a long story short, and with a huge thanks to nastynate for curious testing, the answers are: No. Neither option worked.

Some units even seemed to have the shorter building-range adapted, and the escort-ing makes the inside-units move outside, when an enemy is in-range. So overall the guidance is to never ever press any hotkeys on inside-units - haha.

There is, nevertheless, another combining option of units and structures, which deserves mentioning. Known as a trademark of ORA-1Way, you can bring up to two tanks defensively onto a - if attacked - tank-repairing Depot. See this pic out of a game C|ommander and cousinclaus versus ORA-boy and ORA-1Way: 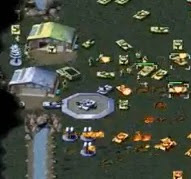 The first is easy, the second is - i am guessing only - brought onto by a skilled use of the S-button´s different function to gather-units-together (there is somewhere a video of AndrewFord showing it with rifles, like gather 20 riffles toga on one square only).

A similar version of this is possible with ships and naval yards: let ships fire, while auto-repair them - if they are in the yard´s range and u before clicked the repair-golden-cursor.

Though, while the navy-version is clearly no fusion of units and building at all, the depot-tank-version has also not the super-structure criteria of inside-units. So we better call it onside-units then - and the defining idea of: units taking the damage of the building to save it is not granted as well. So, still it is super, but super in "...".


At the moment, those mentioned Super-Structures are not enabled, until funky adds the new on/off-button to the game lobby. Anyhow, be prepared for that moment :)

p.s.: Facing a super-structure and u wonder how to defeat it? The tanking grandmaster Atom1 gave 2 years ago THE advice in an article on: How to beat a super tesla. Take a look.
at 6/21/2018