This can obviously not be a re-invention of a Guide On Hotkeys - the information is out there from the beginning. This guide merely is a new version with three major benefits:

1.) The overview of all hotkeys is arranged with a colorcode from beginner to medium to advanced in order to give newcomers a sense of: With which hotkeys best to start with, and how to proceed.

2.) Besides some direct notes, the important sequences and glitches of hotkey-usings are hyperlinked to other articles and guides of this website in order to make it easier to find further details and tactics - which otherwise let ´s any hotkey-guide explode cause of tons of info.

3.) And finally the hotkeys are arranged functionally-wise in a common sense logic - neither alphabetically nor randomly:

Moral: To become a better Commander, and conquer more often, it is absolutely essential to learn, practice and perfect in hotkeying.

Keyboard Settings: To re-key a Hotkey

There is a standard key arrangment for all hotkeys in the cncnet-lobby-settings-menu. However, you can also re-arrange/customize/ re-key them to your own best fits. But this has some principles:

1.) To change it in this settings-menu just type in your wished new keyboard-key to become that hotkey (be careful to not have one key for two hotkey-functions arranged, so they don't work).

2.) There is an option to change hotkeys manually in the rules.ini-file. See examply TAB-button disabling article for further instructions.

3.) Major aim for re-keying should be to arrange your needed hotkeys around your most used ones! That could either be Q and/or the Shifting hotkeys for tankers, or maybe the bookmarks for builders in some cases. It is a highly individual issue, where to arrange the hotkeys on your keyboard.

4.) For not-in-use hotkeys or useless ones, it makes lotsa sense to disable them (to not accidentally press them) by arranging them all on one far away key like # * ; : etc., this will disable them.

5.) Exceptions from these rules are: shift- and ctrl-key can't workingly be re-keyed inside the settings (unless u are willing to formate those keys in your general PC settings). 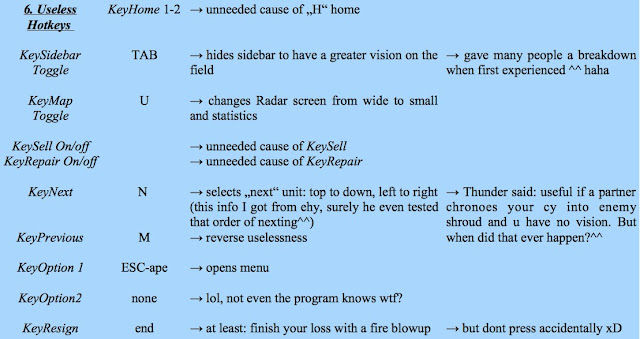